It is widely shared the idea that the ferrule effect wonderfully reduces the risk of decementation and coronal microleakage in a post-endodontic restoration.

But, why and how?

Engineering pieces of advice are here revealed to understand why a ferrule’s absence might endanger your reconstruction and even lead to post-and-core dislodgement. Recommendations are given from a structural point of view. By adding this “Engineering Perspective” to your solid clinical experience and knowledge you, definitively, boost your level of success.

Imagine you are enjoying a nice evening party with friends and get a phone call from one patient. Gasp! Yes, that one. The pain in the …flank! He reports that his post-endodontic reconstruction is now decemented.  First of all, ask yourself if you made the ferrule, and if you made it correctly1.

Causes of a early break in absence of Ferrule

Let’s imagine having a cyclic loading (fatigue) and consider an average force  F (chewing ) inclined at 30°. We decompose it in a vertical component FV – relatively less dangerous- and a horizontal one FH. It is reasonable that the latter might cause major stress coming from nano, or even less, elastic slidings and rotations.

Slidings and Rotations at nano level or less.

The bigger are the slidings and rotations, the bigger is the stress. The sliding of the entire crown might occur at crown-tooth structure interface level (in Fig. 2 represented in yellow). It is, also, likely to cause a small secondary rotation itself (around a “B” axis). While a greater rotation might occur around an A axis (see Fig. 2). Technically, the last one, it is called “overturning moment”.

Furthermore, “elastic” means that, after each force release, the block made with clinical crown+core-and-post system gets back into its initial place. This to-and-fro, due to the cyclic loading, might be repeated hundreds of thousands of times and it is directly connected with the stress measured at the composite-dentinal wall interface -“accordion effect”  – causing the outbreak of criticalities.

Why the ferrule effect reduces the stress almost to zero?

To dramatically reduce both the slidings Sx and the Rotations you should build your defence by making a ferrule. On top of that, the artificial crown will brace the circular  “wall” obtained in the tooth structure and keep everything, firmly, together. This wall will contrast the push coming from FH by opposing a constraint reaction RX. Thus reducing by a certain percentage the strength of FH and, at the same time, reducing the rotational effect around the A axis to almost zero.

As a consequence, the criticalities and the level of stress of the adhesive interface will be substantially reduced to zero as well! The crown+root+ core-and-post system will result in a much more stable monoblock. It also facilitates a longer cyclic loading. A ferrule boosts exponentially the endurance of your post-endodontic reconstruction.

How is the  “ferrule  effect” obtained?

The geometry is a key factor of success.   A ferrule is made through parallel walls of dentin extending coronally from the crown margin.

Start from the edge of the crown with a chamfer or bevel profile and raise a wall of at least 1.5 mm (minimum) or 2 mm (better). Do your best to make sure you have, at least, 1 mm thickness all around as shown in the picture below. Such a structure will generate an effective constraint reaction RX.

As a consequence, FH will have a residual value which is a small fraction of its initial one and, also, pretty close to zero. The overturning moment around the A axis will be also reduced almost to zero.

Under these circumstances the post (of appropriate shape) and core system will be adequate to support the crown and dissipate the kinetic energy.  No stress for the hybrid layer, no stress for the adhesive elements, and, indeed, no decementation. At least, in this respect, if not other undermining causes occur. If you have prepared all these simple precautions, most probably, your phone does not ring and you enjoy your party!

Engineer, researcher, and designer specialized in dental prosthetic materials. Passionate for foreign cultures, sea, Italian cuisine, and witty comedies. I stay in Venice when I need inspiration and creativity!

View all posts by Andrea Panarello → 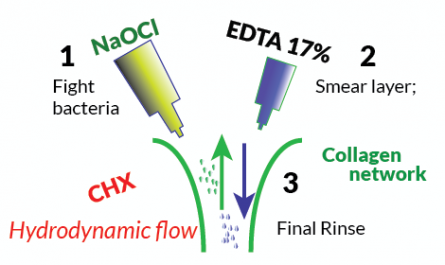 Irrigants in endodontics: 4 Keys for a successful restoration.

Engineer, researcher, and designer specialized in dental prosthetic materials. Passionate for foreign cultures, sea, Italian cuisine, and witty comedies.
I stay in Venice when I need inspiration and creativity!

This website uses cookies to improve your experience while you navigate through the website. Out of these cookies, the cookies that are categorized as necessary are stored on your browser as they are essential for the working of basic functionalities of the website. We also use third-party cookies that help us analyze and understand how you use this website. These cookies will be stored in your browser only with your consent. You also have the option to opt-out of these cookies. But opting out of some of these cookies may have an effect on your browsing experience. If you want to know more, check our privacy policy.
Necessary Always Enabled
Necessary cookies are absolutely essential for the website to function properly. This category only includes cookies that ensures basic functionalities and security features of the website. These cookies do not store any personal information.
Non-necessary
Any cookies that may not be particularly necessary for the website to function and is used specifically to collect user personal data via analytics, ads, other embedded contents are termed as non-necessary cookies. It is mandatory to procure user consent prior to running these cookies on your website.
SAVE & ACCEPT
Translate »