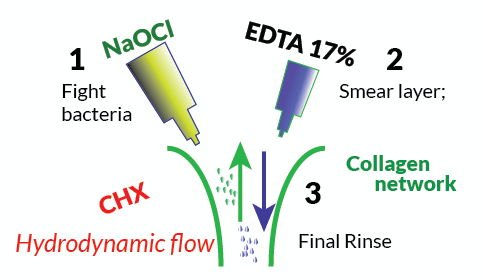 Is irrigation the secret of a successful post-endodontic reconstruction? Are there engineering secrets involved in such a job? What do you think?

A friend of mine – a very skilled dentist – asked me these questions for a different perspective opinion, the other day,  before ordering a cocktail at a bar in Giudecca. The largest of the islands in Venice.

Of course, irrigation must satisfy a number of requirements. Therefore, we sat by the quay, in front of the lapping water, and I started to put my “perspective”  down in black and white.

There is a vast literature on how irrigants help an endodontic restoration to succeed. Yet, we tried to build a clear picture- in spite of the fog hovering the lagoon – of what irrigants must do and don’t.

First: Organic battle – kill bacteria! All of them, and dissolve tissue.

The champion, here, is Sodium Hypochlorite (NaOCl), a reducing agent. Concentration might vary upon the clinician’s preferences. 5.25% is widely used by the majority of the endodontists. However, many others prefer a lower concentration (ranging from 0.5 to 5%), in a trade-off between less antimicrobial efficiency and more “safety” related to the dentin demineralization and level of toxicity. While others push the %age of chlorine concentration up to 6%, and even slightly more.

What do we ask to the above irrigant? Simply, to kill bacteria and dissolve the pulp tissue!

A vast majority of practitioners and academics agree that Sodium Hypochlorite does an excellent job in both these respects!

Chlorhexidine  (CHX) is also a viable option for its broad antimicrobial spectrum. A 2% concentration is very effective, for instance, against E. Faecalis. On the other hand, it is not as effective as NaOCl to dissolve tissue and it does not dissolve efficiently biofilm. Nevertheless, it improves long term dentin bonding to resins thanks to its substantivity (remains in dentine).

Others, more traditionally, use Hydrogen Peroxide (H2O2), which brings about a good level of effervescence and bubbling.

MTAD – Mixture of Tetracycline, Acid (Citric), and Detergent-  is also used as an antimicrobial with a  multitasking action. It is used for the final rinse, and, sometimes,  after NaOCl to remove the smear layer

How to deliver these irrigants to remove pathogenic microorganisms and their communities?

The challenge is to reach the apical third efficiently. Understandably, the “dodgy” area of the irrigation process. To be effective, the solution must be delivered with active irrigation. In other words, one must create an intense hydrodynamic flow in order to have an impact on the biofilm.

How? “Agitate, and, if possible, stir it”. Add a mechanical action to the chemical one. Use the kinetic energy of the solution. Just pumping it in might be not enough. The agitation should create some level of pressure bottom-up which facilitates the flow from the apical third.

The EDTA 17% concentration is the most commonly used and widely investigated chelating agent.

Citric Acid (CA) is an EDTA’s “close relative” able to remove the smear layer. But, according to some, when CA is used alone it creates the formation of crystals, which harbors microorganisms. One study reported that CA removes smear layer less effectively than EDTA.

The prolonged activity of residual chelating agents might undermine the endodontic seal. In fact, if it is not thoroughly removed, it keeps chelating. A kind of eating mineralized parts of the residual tooth structure. As a consequence, it may lead to apical leakages, and reduce hardness, finally, resulting in endodontic fractures. Consequently, avoid prolonging its action. More exposition, more demineralization.

It is good that after using the chelating agent a large number of dentinal tubules are open. But, we don’t want “a large number”, we want “them all”. We want to dislodge, not only the smear layer but also the smear plugs!

Why that? Because of the superposition effect. The more tags we obtain, the more lines of force we obtain to secure a sound built monoblock in the post-endodontic reconstruction.

Third: How should we deliver the chelating agent?

Many people pump it in, solely, relying on gravity to reach the apical third. A more advanced technique involves the use of a Leur Lock syringe and needles with a lateral nozzle (side-vented needles). Basically, not directed to the apical foramen (handle with care in this area to avoid foramen perforation). The needle must not bind. It should have enough space all around to “agitate” and provoke hydrodynamic flow. Others use multi nozzles tips to better addressing the dentinal walls.  Nevertheless, the goal is to leverage active irrigation through agitation and, once again, apical-cervical hydrodynamic flow to flush out debris. One can’t be very effective with just gravity-driven irrigation.

Surfactant! That is an ally. A Surf(ace) act(ive) a(ge)nt lowers the tension -van der Waals forces reduction- and allows the irrigant better penetrate the “narrow passages” of the apical third and lateral openings. This is what a savvy endodontist must strive to do.

The return flow of the solution should be not a “desirable” effect. It is the effect!

And now? This is the nicest part of the story. If one fails this step, the risk is to screw it all!

I like this sentence: “The solution to pollution is dilution” ( D. Luper).

As in any respectable “wash”, at the end it comes the rinse.

A good rinse permits to obtain the persistence of a compact and homogeneous peritubular dentine. This is the ideal dentinal form to receive the etching and adhesive components.

As it might be risky to rinse with NaOCl after EDTA use -being caustic to exposed dentine, it would erode the dentine- therefore, for a final rinse, a different antiseptic solution should be used. Chlorhexidine appears beneficial. It has an affinity for dental hard tissues and, once bound to a surface, it has prolonged antimicrobial activity, because of its substantivity.  CHX might be considered for the final rinse. However, some suggest that there is the formation of a precipitate in combining NaOCl, if not completely removed before, and CHX. I want to stress again the importance of agitation to flush all debris out. One should bear in mind that, from a chemo-mechanical point of view, the amount of the root canal irrigant is more important than the few % points of concentration difference of its active elements. Therefore, use abundant irrigation in this phase.

To rinse with distilled water and not completely absorb the liquid phase is something put forward by many. For instance, drying by using the paper points (in and out). It would help the collagen network to remain slightly hydrated, hence vigorous. Not collapsed.

The literature presents many protocols, yet we do not present any of them here. We stick to the supposed deliverables of the irrigation agents.

In doing so we must emphasize 2 key requirements of the rinsing:

After the conclusive “rinse” irrigation, the desired outcome must be that of:

The above outcome cannot be appreciated inside the radiographs so one must focus on the results while performing the irrigations. Try to imagine in your mind what is truly happening at the microlevel. Like if you are watching a movie inside the root canal.

Well, I talked a lot with my friend. Yet, after watching my notebook, I noticed that only 4 lines there were written on it. 4 key sentences:

Meanwhile, the waiter came and asked for the cocktails. “For me Martini with Vodka. Agitated …and stirred”.

And you? Have your say on irrigation.

Engineer, researcher, and designer specialized in dental prosthetic materials. Passionate for foreign cultures, sea, Italian cuisine, and witty comedies. I stay in Venice when I need inspiration and creativity!

View all posts by Andrea Panarello → 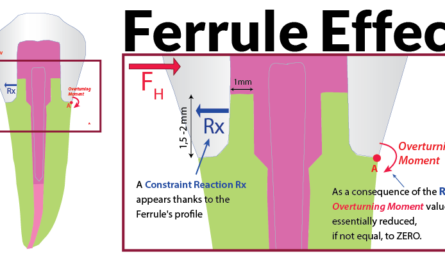 Engineer, researcher, and designer specialized in dental prosthetic materials. Passionate for foreign cultures, sea, Italian cuisine, and witty comedies.
I stay in Venice when I need inspiration and creativity!

This website uses cookies to improve your experience while you navigate through the website. Out of these cookies, the cookies that are categorized as necessary are stored on your browser as they are essential for the working of basic functionalities of the website. We also use third-party cookies that help us analyze and understand how you use this website. These cookies will be stored in your browser only with your consent. You also have the option to opt-out of these cookies. But opting out of some of these cookies may have an effect on your browsing experience. If you want to know more, check our privacy policy.
Necessary Always Enabled
Necessary cookies are absolutely essential for the website to function properly. This category only includes cookies that ensures basic functionalities and security features of the website. These cookies do not store any personal information.
Non-necessary
Any cookies that may not be particularly necessary for the website to function and is used specifically to collect user personal data via analytics, ads, other embedded contents are termed as non-necessary cookies. It is mandatory to procure user consent prior to running these cookies on your website.
SAVE & ACCEPT
Translate »